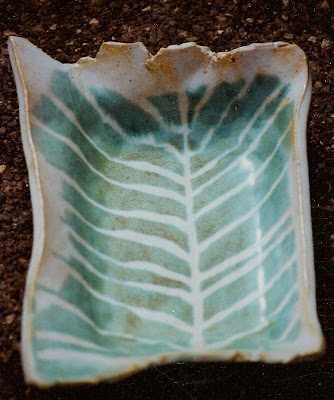 This is the first of many dishes and trays I've made with the palm or branch motif.
It's really not nearly as complicated to do as it looks.
This dish was formed by laying a slab over a hump mold and letting the edges at the top and bottom remain just as formed. I trimmed the sides with a fetling knife, though.
After bisquing and waxing the bottom, I dipped the whole thing into a semi-matt white glaze. Taking a fine brush and liquid wax resist, I painted the negative spaces I imagined between a palm frond. (The white areas.)
Of course, you wouldn't have a white spine on a frond, but I decided that is artistic license.
After the wax sat, I poured weathered bronze glaze in the inside, starting at one end of the dish and, tipping and rolling it gently, covered the areas I wanted green and poured the glaze out the other end of the dish back into the glaze bucket. This glaze had a nice brown residue that showed up in the firing.
Every dish I've made in this way has sold. It's a real winner. I want to try it again and again in different combinations--one brown and a tomato red combination worked really well. And the addition of another glaze, probably applied using a brush, would be an interesting evolution to the design.
P.S. We are still involved with working on houses. We are now in our winter house, which was flooded out and we have been reconstructing it for the last 6 months as well as renovating the kitchen in Washington State.
I'm itching to get back into the studio and back to claywork!
Posted by Clay and Fiber Artist at 7:09 PM 2 comments:

Newer Posts Older Posts Home
Subscribe to: Posts (Atom)
All images displayed in this blog are included in the interest of sharing aesthetic appreciation and are solely used for the exploration of creative thought and work. There is no intent to profit or exploit other artist's work.
Whenever possible, attribution will be noted. However such inclusions are not always possible.
I also sometimes write about needlearts & fibers
Check it out on www.fiberneedle&thread.blogspot.com