Later on this year, a gallery in Tacoma called The Art Stop will sponsor a show and sale of dog and cat related works called "Arfs and Crafts". Aritsts make bowls and donate them to the sale. The proceeds go toward supporting the dog training program at the State Women's Prison in Purdy, WA. The women train them to be guide dogs. It's a really worthy cause which I've supported it for some years now.

So, the other day I got my head into a really funny gear thinking of an idea along the same line as the cat plates, etc. Yesterday, I made a tile by rolling out some clay, creating what looked like a note pad and added 3-D cat paws just at the bottom of the pad. I will write a message on the clay pad that says, "If you ever want to see Binkey again, leave 5 opened cans of Fluffy's Favorite outside the cat door--- or else!" The 'else' will trail down to the place where the paws are. And they will be made in such a way that you can put a ball-point pen in them.

I'll make two; one for me and one for the gallery. When I finish, I'll add a photo.

Of course, this kind of mind-kink brought on more funny stuff, like a tile that shows a stream of water at the bottom and at the top, the title, "The curse of a mind that never shuts up." Word bubble coming out of the water reads: "Help! I'm drowning in a stream of consciousness." And this one: 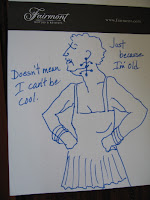 That's gotta be a tile.
Posted by Clay and Fiber Artist at 3:43 PM No comments:

I've been thinking more about Christo's work. A lot of people have thought it 'wierd' or 'silly' to wrap islands, make fabric gateways, etc. but what he's really doing is saying, "Take a fresh look at something you're been looking at and seeing it only to identify it." That's how a lot of people see things; only to label things, places, people, not really SEEing it. Christo presents us with a new vision; reidentifying something and making us really look at it.

That's part of an artist's job.

I usually don't like to get into this kind of thing. It seems to lame to try and use words to define a thing like 'art'. It's sort of like talking to computer geeks or reading manuals. I know it's English, but what does it Mean? A visual experience and language are two totally different things. One is right brain; the other left brain. If you could speak in double voices, using double language, then you could really talk about it. Sort of like singing. That takes both sides of the brain. If we could only sing art.........

Aaaaah! This makes my teeth itch and my hair hurt.
Posted by Clay and Fiber Artist at 4:16 PM No comments:

So I got a message from my gallery saying that over the Christmas holiday, both sets of my "Cat Plates" sold. I'm delighted. They were a lot of work, but so much fun to make. I love to let my whimsey run wild.

It all started many years ago when I was working at Seattle University in the Fine Arts Department and having a conversation with one of my favorite people, Roupin Shakarian, about Christo's work and how draping fabric over landscapes and buildings created a whole new image. I dashed off a quick sketch of a cat all wrapped up like a mummy and labeled it "Christo's Cat". Some months ago, I was going through a file of old sketches and ran across it again. The idea still made me laugh and, since I had learned lately how to draw with underglaze on raw clay. (I had been wrestling with learning how to throw plates and the two ideas came together instantly.) I began to develop a whole collection of different artists' cats: Picasso, Jackson Pollock, Michelangelo, Dali, Henry Moore, Georgia O'Keefe. Christo & Calder. After many, many plates, I finally made two sets I was happy with. 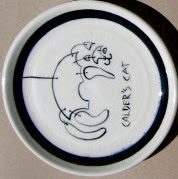 The only hiccough has been that one of the buyers thought the Calder plate had a bit of fuzziness on part of the banding and would like a replacement. I explained that it would take a good while before I could have one ready, since it would have to be thrown, drawn and decorated, bisque fired and glaze fired--all to be included with other work in progress in the making/firing cycle. The gallery owner said that they were okay with that and understand the process. That's great. So, I've been in the studio making many Calder plates because it wouldn't be wise to only make one and think that it will be perfect...not going to happen.....I have to hedge my bets. Also have to make enough stuff to fill the kiln. This is going to take a while. In the meantime, I'll develop drawing on clay further with more pieces and ideas. 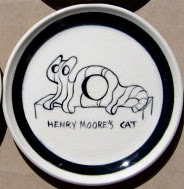 Posted by Clay and Fiber Artist at 5:19 PM No comments:

Soon, I'll know if any of my pieces from the "Whimsical Clay" show in Beverly Mass have sold. This is a really fun show. It's open to any medium and some very clever pieces are included. It's mostly for Massachusetts artists, but this year they called me before the prospectus went out to ask if I was planning to show again. I think this is my third year.

The little fish are about an inch to an inch and a half long, are all hand formed from a little ball of clay and are hollow inside. They are whistles--little one-noters. They can be put on a Christmas tree, but one customer strung hers on a leather cord and loves wearing it around her neck! The Ray Gun is first made on the wheel by throwing different components, then hand forming clay to make the grip, loops, etc. This one I fired to bisque, then applied a special surface treatment that makes it appear to be very old metal. The name of the piece is "Lunar Artifact" as if it were tagged and on display at some museum in the future. Opens all kinds of ideas........
Posted by Clay and Fiber Artist at 5:38 PM No comments: 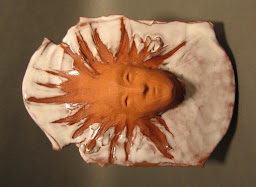 I have two wall pieces in this show which is located in the library and will have work that is related in some way to literature. What a fine idea. I love the combination of words and clay. The first piece, entitled, "Snow Queen" is about a foot tall and is made of terra cotta with white glaze brushed over areas of the clay.

The second piece was originally called "Dilemma", but I renamed it "Hamlet" for the literature link. Hamlet did have a dilemma after all.

However, after I photographed the work for my records, I'm thinking I should have called it "Dracula". 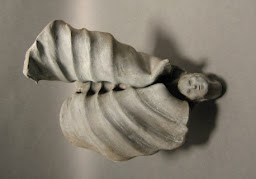 Posted by Clay and Fiber Artist at 10:55 AM No comments:

Got word this last week that my large teapot currently showing in the Texas Teapot Tournament has sold. It’s one of the hand built ones and the handle is wrapped in leather cord. Here’s the jury shot. Also in the show is my Shino 3-piece set. Would be nice if it sold too. Thinking about the new year

Today I made preparations to attend the Shadbolt Center for the Arts Canadian Clay Symposium in March by researching maps on the computer and figuring out places to stay. Reviewed the artists who will be presenting and zeroed in on who I want to see work. Looking forward to seeing my old friend Mark Hewitt from North Carolina. Took a workshop from him in Seattle a few years back and really respect his skills as a potter.

Trying to decide which piece of work to take for the "Roadshow" exhibit and may take my tall white teapot. 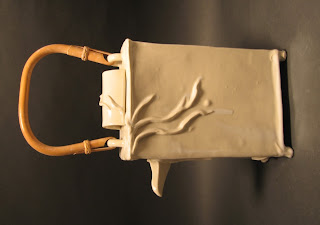 It and some other pieces that is now languishing at the gallery I left it at for the jury committee. The gallery is 30 miles from my studio and the weather has been foul, so I'm not real anxious to drive back and pick up my stuff.
Posted by Clay and Fiber Artist at 6:16 PM No comments:

Labels: class, exhibits, teapots
Newer Posts Home
Subscribe to: Posts (Atom)
All images displayed in this blog are included in the interest of sharing aesthetic appreciation and are solely used for the exploration of creative thought and work. There is no intent to profit or exploit other artist's work.
Whenever possible, attribution will be noted. However such inclusions are not always possible.
I also sometimes write about needlearts & fibers
Check it out on www.fiberneedle&thread.blogspot.com