The conversation between the salt and pepper 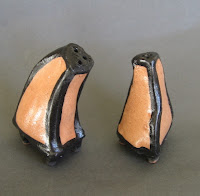 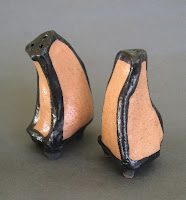 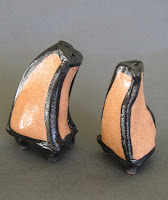 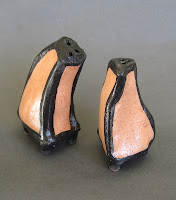 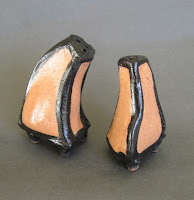 These characters just sorta 'happened'. I rolled out some terra cotta and began cutting out shapes and putting them together. Just a total surrender to the clay.
Posted by Clay and Fiber Artist at 9:02 AM No comments:

This is a tiny gun that went to a show and sold. I'm glad I have a photo. It's one of my favorites. It's worth repeating, with a variation of course. The finish is many coats of acrylic paint.

"Artifact" is the last of the ray guns that don't stand on their own.

"A CONTINUING CHAPTER IN THE SAAAA----GA OF THE SEARCH FOR A FINISH."

This finish is really an experiment in using an oxide to create the look of age. I'd seen this finish used on a piece of sculpture. The tag is there so the piece looks like an exhibit in some space museum. 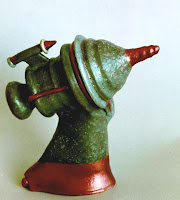 I was later to discover a much better way of finishing them but on the way, I made "Cosmic Blaster".

By this time, I figured out how to make the grip so the gun stood on it's own. I searched for some kind of stand that would be invisible (the other guns had to lay on their sides and didn't stand) but had no luck in finding anything that didn't interfere with the look of the piece.

This is a larger gun. The surface of the clay is rough and fired with a copper glaze. At first, I thought it was a failure. It sat around the studio for quite a while until I discovered another finish that was applied copper. With the help of a nearly iridescent blue-green acrylic to enhance the green glaze and applied copper, the piece changed completely. "Cosmic Blaster" was shown at "Toys Designed by Artists" at the Arkansas Arts Center in Little Rock.


A thought: Clay is an art medium for those who WANT to be in control, but can live with NOT being in control.........
Posted by Clay and Fiber Artist at 6:11 AM No comments:

When I first started making ray guns, I didn't know a good way to make a finish on the surface and opted for some Daniel Smith metallic acrylic paint. It made them look like the cheap plastic ray guns that had dazzled me as a kid. I wanted to make the kinds I had wished for, but hadn't ever seen.

Once I saw a display of 'real' ray guns and transporter/communication devices actually used in TV and movies like Star Trek, etc. What they looked like on the screen and what they were in real life was two different things. They were flimsy, some rather clunky and definitely not the sleek, streamlined instruments enhanced and embellished by my imagination and the magic of film.

I wanted to make more than a water gun or cookie shooter. This first one is a very small and made of stoneware--a clay that is just too rough for the kind of surface I was looking for. I would later learn porcelain and found it was much better.
Posted by Clay and Fiber Artist at 5:51 AM No comments:

Just a thought.
Posted by Clay and Fiber Artist at 6:59 AM No comments:

I must confess. I've become a horrible blog junkie.

Somehow I stumbled on a blog written by a free-lance comedy writer located in London in which he chronicles his travail pitching sketches and short stop-action animation film scripts to producers of same. In my naivete, I had assumed such things happened like this: Garret-housed writer dreams up a funny script, scribbles it down, puts it in a binder, takes a cab to a garret across town, walks up several fights of Very Ornate Victorian Circular Iron stairs to the window-walled attic studio of animator, hands it over and says something like, "Hi, Trevor, Take a look at this idea."

Not so. Instead, my poor writer is bemoaning the fact that he wrote the proposal for a script idea some months ago, sent it off to the MONOLITH GIGANTIC ANIMATION STUDIOS BEHOMETH, (meanwhile living on tap water and wafers) and after much consideration, they responded through their representatives that they might consider his idea, however, given the fact that, since they had already produced one of his scripts for another animation short, it would have to be purchased at a lower fee than they had paid him previously. (Whaaaaa?)

Of course, this only spurred our funnyman to think of even funnier things to write (! Irony meter goes into overload spin) so, he creates a short film script in a few weeks of creative fervor. He arranges an appointment and presents a script (I would assume in a supine posture) to the said Monolith. A few weeks later, Contact! The Monolith has spoken!

"We think the script has merit and possibilities, however we DO question the idea of putting the flock of sheep in Ninja costumes."

And so, I say to Potters of the World Everywhere who Make and Sell their Own creations:

Be VERY glad that YOU are the only committee that has to pass on the merits of your creative work before it leaves your hands.
Posted by Clay and Fiber Artist at 9:13 AM No comments:

More Tile in the Works 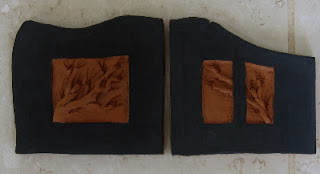 While I was doing the Robot Tiles, I made a dyptic using clay to sculp plant life as if it were being seen through windows. I applied black underglaze to the outter rims to frame the image. It was all I could do to keep from painting the whole thing and then and wiping off the underglaze on the sculptures.

Must remember to do this again. Reference post on Making Two.

I'm really anxious to see how these turn out. The photo is of the greenware.
Posted by Clay and Fiber Artist at 8:30 AM No comments:

One of my tiles was selected for 500 Tiles by Lark Publications!

I got my comp copy a week or so ago. 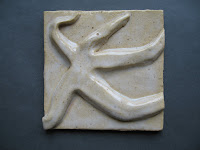 The book is wonderful. Such an amazing variety of work. It's an inspirational index. No excuses about getting stumped about what to make; just open this book and get inspired.

I'm humbled by the incredible variety and skill of the work. It's a winner.

When I sent in the photo, I submitted 3 pieces - all of sea life - Didn't even think about taking a shot of them all together as some entries did.

**insert slap up the side of own head**

And did I think of the tile I wrote earlier about (November 2007) for the back of the standing mirror? Duh

**insert kick up the backside** Silly Attention-Deficit me.


I do it to myself. It's like, "Okay, worked that one out and made it. NEXT!" I promptly forget and go right on to the next thing.
Thank God for cameras.
Posted by Clay and Fiber Artist at 7:55 AM 1 comment: 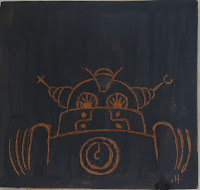 Transfered drawings onto black underglazed greenware terracotta tiles by using scraffito with a fine needle tool. Boy, my hand is tired. I drew the robots using a soft-leaded pencil then scratched out the lines. 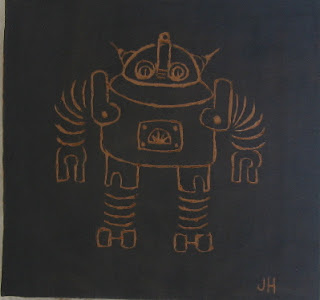 I have no idea if they are wide enough. I'm assuming the underglaze will stay put in a bisque kiln, then I can glaze the tiles with a transparent glaze. 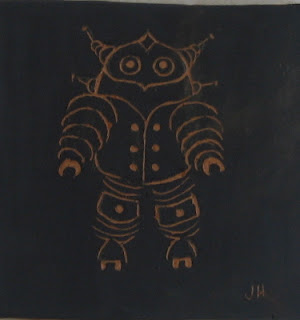 These are definitely old-fashioned robots; not like the modern Japanese influenced transformer like models. They're more R2 D2 than C3po. I think I like the little fireplug, pressure tank guys. 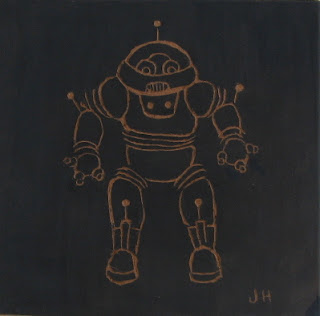 I really like the toy-like look of the robots combined with the rather menicing dial-eyes. 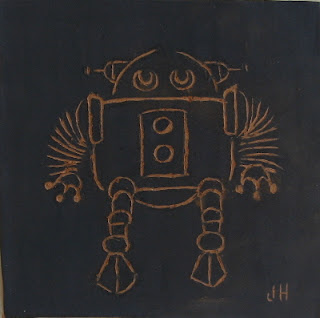 All the tiles will fire to a deeper black. They appear a bit 'dusty' in the green stage because of the residual terra cotta dust left on the underglaze after carving the designs out.
Posted by Clay and Fiber Artist at 5:35 AM No comments:

Labels: Robots and Rayguns, Tile
Newer Posts Older Posts Home
Subscribe to: Posts (Atom)
All images displayed in this blog are included in the interest of sharing aesthetic appreciation and are solely used for the exploration of creative thought and work. There is no intent to profit or exploit other artist's work.
Whenever possible, attribution will be noted. However such inclusions are not always possible.
I also sometimes write about needlearts & fibers
Check it out on www.fiberneedle&thread.blogspot.com