I have a bookmark on the computer entitled "Eye Candy". It's a place where I put things I want to just look at in order to feed my artistic soul. 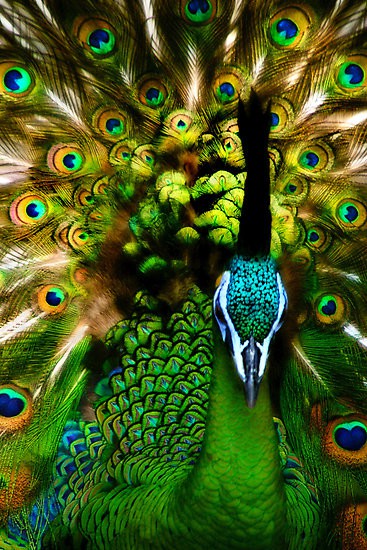 I used to collect beautiful books and files of images in order to do this, but electronic images are even better. Mainly because they are more vibrant, created with light and more real-world than print matter. 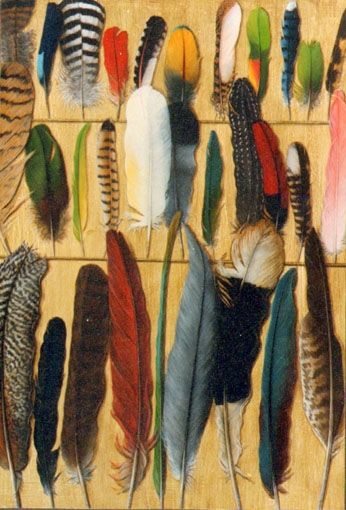 This painting is by Paul Hodges. He is the Artist in Residence at Highclare Castle, the film location of "Downton Abbey".

Looking at things that inspire gets the creative part of your brain whirring and you begin to daydream about making wonderful things. I don't want to lose that.

So, after this inspiration, I want to do a few colored pencil drawings of my feather collection and then a study in black and white.

Eventually, when I am able to set up my clay studio again,  I will apply what I learn from the drawings on a clay piece; maybe on a box lid or a tile.

I will also print off this image, put it into my paper "Springboards" file folder along with my drawing studies for future reference.

And the jpeg will also go into my cyber file on the computer desktop for easy access as well.

That way, I will be able to tap into the original feelings I had when I first ran into this piece,  recapture the creative thinking and take it further.

What do you look at for inspiration?


Posted by Clay and Fiber Artist at 12:28 PM No comments:

Seems as though people make either small bowls or really big bowls. I hardly see medium bowls at shows. Yet, these bowls are sometimes the most useful.

It may have to do with kiln fit--small bowls can be placed around the perimeter; big bowls take a lot of kiln room, but are more impressive and therefore can be more expensive. Medium bowls are sort of misfits.

This is a bowl I made in another studio setting than my own. It was an experiment with a different clay and different studio glazes. It's good to work with unfamiliar materials sometimes.

(Unfortunately, it is no more--lost when we had the flood and the packers didn't know how to pack pottery.)

It was about 6-7 inches across and of medium depth. Very handy size. 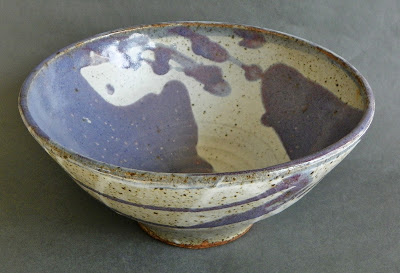 This is another glaze test mostly. And it is a slightly bigger and deeper bowl than the previous one. The white glaze was poured in first, then the maroon glaze rolled around the rim. Great contrast where both glazes overlapped and were poured out. 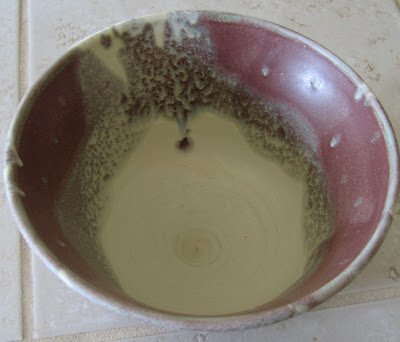 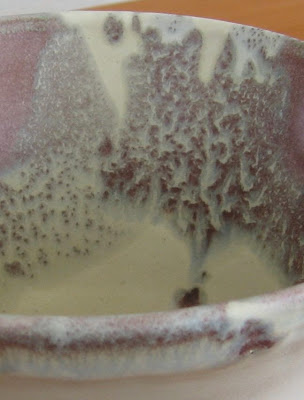 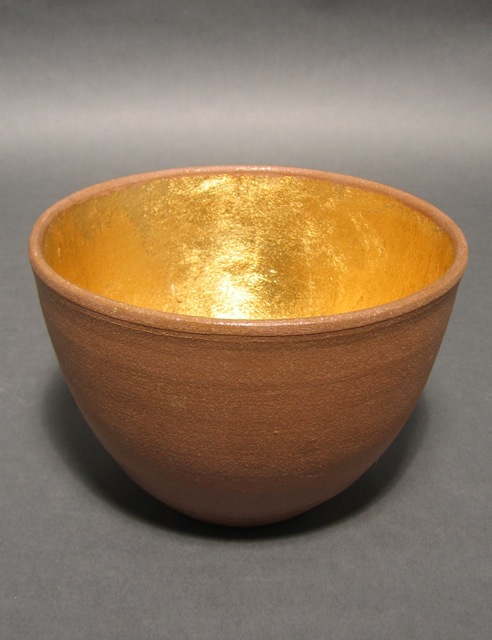 I love this bowl. It's totally useless, but I just like to look at it.

I was doing a demo about how to apply gold leaf and used this earthenware bowl to show the contrast in surfaces.

Come to think of it, since this is a non-utilitarian bowl, I wonder if another surface application like acrylic paint would be added to either the leaf or sealed earthenware??? 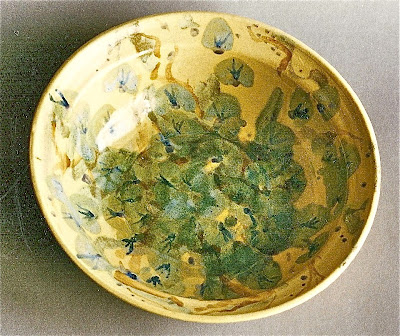 Here's where painting with glaze works. The base is a yellow matt glaze. I decided to add green organic-like leafy applications and then use a stain for the darker cobalt blue and brown accents.

This is a medium to large bowl, quite shallow, but with a larger circumference. This bowl barely left my hand in one of my first shows when it was snapped up.

This very large bowl was a challenge. It is a monster. All hand-formed, it was made using a big, awful orange plastic mid-century salad bowl as a mold for the top and a paper pattern for the base. I worried quite a lot about getting a good fit between the two parts and about firing it, but it all went well.  This piece is still in my collection. It is worth an encore, I think.

The glaze is Coyote Shino. It was murder to glaze; very cumbersome. 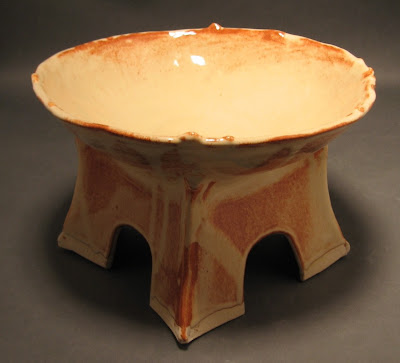 A very early piece, this is another bowl made using hand building over a form. Early in my claywork, I used mostly white or clear glazes, focusing mainly on form. It was quite large. The black glaze was slapped on using a big paintbrush. A second layer of a plumb brown glaze was laid on over that with a smaller brush.

I made this after working on another piece that required very detailed and meticulous work. It's good to lash out on something else a bit, just to release that energy. 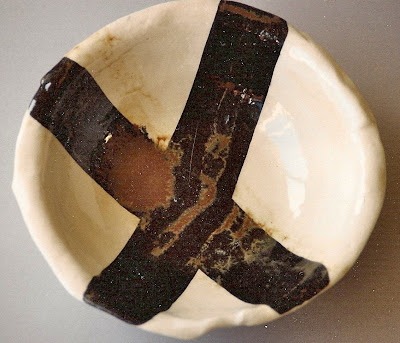 Not pictured here are bowls made using a blowtorch while throwing on the wheel to hasten the drying of the clay. Although a bit frightening at first, the Ken Turner workshop I took some years ago dispelled all that fear and I love to make whopper bowls using this method. Ken is doing a workshop on foil sagger firings right now. You can find him on the web.

The good thing about medium to large bowls is the opportunity to work with a bigger pallet and surface; make a bolder and a more eloquent statement. And, as in the "Snow Bowl" and the "Flower Bowl" expand experiments on a larger surface.
Posted by Clay and Fiber Artist at 8:53 AM 1 comment:

Labels: aesthetics, bowls, design, glaze, handbuilding, home decorating/design, slabwork, wheel work
Newer Posts Older Posts Home
Subscribe to: Posts (Atom)
All images displayed in this blog are included in the interest of sharing aesthetic appreciation and are solely used for the exploration of creative thought and work. There is no intent to profit or exploit other artist's work.
Whenever possible, attribution will be noted. However such inclusions are not always possible.
I also sometimes write about needlearts & fibers
Check it out on www.fiberneedle&thread.blogspot.com